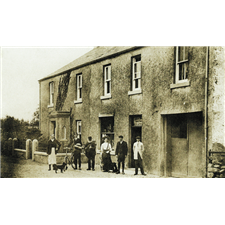 The home of the Traditional Cumberland Sausage...

Nestling between the western edge of the Lakeland fells and the Irish Sea lies the sleepy backwater village of Waberthwaite. This is home to R B Woodall, one of the oldest family businesses still in existence. The company, currently run by 7th, 8th and 9th generation family members, is renowned for its much acclaimed traditionally cured hams, bacon and sausages.

Harking back to an age when time was of little consequence Richard Woodall still steadfastly utilises the same recipes and techniques as his ancestors did more than 175 years ago.

The poor pig, so often the source of derision, insult and comedy, was once a vital part of domestic economy and kept by many households, rural and urban alike Back in 1828 Mrs Hannah Woodall, being recently widowed, sought to increase her meagre income by curing and processing the neighbouring families' pig. Aided by her eldest son, Jackson, Hannah's business began to prosper laying the foundations of a very special enterprise, which still flourishes almost two centuries later.

In the late 18th and early 19th centuries Whitehaven in Cumberland was one of the busiest ports in England. Many new and exotic spices first found their way to our shores via the port, and some became established ingredients in local products such as the traditional Cumberland sausage.